Strandja is so intersected by deeply incised streams, ravines and rivers that they create a dense network among its hills and make the process of crossing them rather challenging. Veleka and Rezovksa are the largest rivers in the Bulgarian part of Strandja. 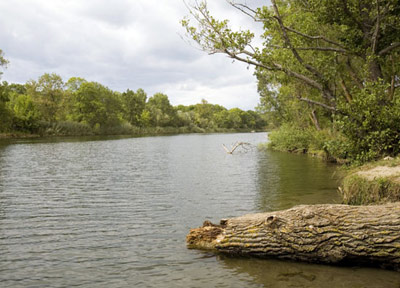 Veleka is the largest and the longest river in Strandja (147 km). It originates from Demirkapu peak in Turkey and flows into Bulgaria at 340 m.a.s.l. with beautiful gorges. In its upper stream, Veleka is covered in branches, with rocky bed, many currents and rapids. Here it crosses the karst. The banks are cliffy, with rocks and precipices. This section of the river is accessible to tourists from the side of Kovach, Petrova niva and the Stoilovo village. After flowing into Mladejka river, it changes its face – it calms down, the river valley becomes wider, its slope sharply decreases and her beautiful meanders appear for the tourists to see. It is here that its larger tributaries Mladejka river and Mechi dol run into it. After Kachul, the tributaries become shorter and winter-flowing – mainly from the gorges Grahilov, Kamenski, Yazmenski, Vlahov, Dyavolski, Angelovski, Bogorodishki, Elenitsa river and others.

There are 32 fish species in Veleka – brown trout, European chub, leuciscus cephalus, common minnow, minnow, Crimean barbell, chalcalburnus chalcoides, alburnoides bipunctatus, amur bitterling, Anguilla anguilla L., Mesogobius batrachocephalus and others. The Bulgarian Red Data Book lists three species of the ichthyofauna of the river – the European chub, the chalcalburnus chalcoides and the amur bitterling. The forests and the meadows in its lower stream are seasonally flooded by spring waters – thus forming a humid and dense wetland. Veleka is navigable 8 kilometers from its outfall and it is precisely this section that draws the attention of nautical tourism enthusiasts. 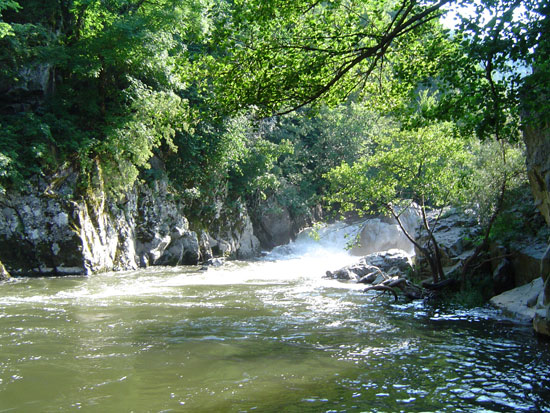 Rezovska – it has its source from the highest part of Strandja in Turkey with the tributaries Paspalovska and Velika. According to a legend, its name is associated with the name of the Thracian king Rhesus. In the past, that was the name of its lower stream, and the people from Malo Tarnovo called it the Big river. Border between Bulgaria and Turkey, this river is still less known and not fully explored. Among its many tributaries are the rivers Deliiska, Tsarnogorska, Lopushnitsa, the gorges Dulbokiyat, Vurliyat, Uhlenski, Zhivashki, and others.

The river forms meanders along the “Uzhunbuzhak” biosphere reserve, which the local people call “buzhatsi” (quiet, secluded and surrounded by the river places) – Djado Kirov buzhak, the Big buzhak, the Small buzhak, Kaleto, and others.

The slopes of Rezovska river are covered with thick oak forests and oriental beech forests. The Mediterranean maquis shrublands are widespread on its rocky inclines. The river terraces and dense forests host rare and protected species. The dense forest form of the Quercus hartwissiana has significant presence in the river dense forests.
The Bulgarian bank is cliffy, with many rock formations, precipices and caves.

Rezovksa river is faster, more sunless and colder compared to Veleka river and thus the trout is more common here. The slow-worm (ophisaurus apodus) , malpolon monspessulanus, also called Montpellier snake – the only poisonous grass-snake in Europe, and the leopard ratsnake are typical for the river valley. Rezovska river flows into the Black Sea in a small bay not far from the Rezovo chapel “St. Ivan.”

Mechi dol – right tributary of Veleka river, 26 km long. It originates from the confluence of the Big and Small Mechi dol, which flow through the Vitanovo reserve. It flows in northeastern direction, in a deep and woody valley with many karst springs. It is wild and swift-flowing, with pools, rocky steps, waterfalls and numerous meanders in its lower part. It receives the waters of the biggest karst in Strandja through the short river Dokuzak. Mechi dol is famous for its brown trout. Before flowing into Veleka river, Mechi dol passes through Stoilovo village. The lower stream of the river serves as boundary of the Sredoka reserve.

Mladejka river (ancient name – Dark river) – left tributary of Veleka, around 40 kilometers long. Its karst springs are 1 kilometer west of Mladejko village, in the eponymous natural landmark. Mladejka river runs through a wooded valley south of the Bosnensko ridge and flows into Veleka river near Thracian camp, south of Zabernovo village. During extreme droughts, upon flowing into Veleka the waters of the river sink into the sands and it partially dries up. Its ichthyofauna is poorer than that of Veleka river. Brown trout can be found in its upper stream.

Delievska (Deliiska) river – border river, left tributary of Rezovska river, around 17 kilometers long. It originates from the Drianovets – Kapina hill, in the high part of Strandja. Its upper stream is one of the coldest, sunless and clean Strandja rivers. Its water catchment area includes the southern slopes of the highest part of Strandja in Bulgaria – Goliamo Gradishte peak (709 m), Drianovets/684 m./, Goliama mogila /603 m./ over Malko Tarnovo. Up until the 1920s, the river bank of Delievo (nowadays in the Republic of Turkey) used to host the Deliev Fair – one of the most celebrated events in Strandja for the time.

Katun – right tributary of Veleka river, around 15 kilometers long. Swift-flowing and cold, it passes through the karst region around Brashlian village. Katun flows into Veleka river just below Kovach area. Right above the outflow of the river is located the only functioning breeding-pond in Strandja.

Tsarnogorovska river -  left tributary of Rezovska river. It receives the water flows of the southern half of Malko Tarnovo valley. It reaches around 8 kilometers of length with its longest tributary. The valley of the Tsarnogorska river showcases the Quercus hartwissiana with its dense forest and karst forms. Tsarnogorovo area continues to this very day to host the celebrated in the past eponymous fair, which attracted people from all over Strandja and Eastern Thrace.

Lopushnitsa – tributary of Rezovska river. Sunless river with amazing oriental beech and durmast forests along the slopes and of Quercus hartwissiana forests near the place it flows into Rezovska river. The main rocks along the steep slopes are made of unstable slates and marl, which causes lots of landslides. Lopushnitsa river serves as the northern border of the Uzhunbuzhak reserve.

Trionski dol – one of the most interesting water catchment areas in the Park, with northern exposure and solid undergrowth of Rhododendron ponticum. It takes its name from the many water-powered saws (frame-saw, clock work), used by the peasants from the Kondolovo and Bulgari villages to saw lumber in the past. Trionski dol is the place where freshwater and sea fish spawn. Trionski dol flows into the Black Sea through Karaach.

Tisovitsa – small river in the northern slopes of the Bosnensko ridge. It runs through century-old forests with undergrowth of Rhododendron ponticum, part of which were included in the Tisovitsa reserve. It flows into Trionski dol.

Oreshka river – It is around 20 kilometers long. Oreshka rover receives the water flows of the northern slopes of Bosnensko ridge and the southern slopes of the Hadjiika ridge through the Ilieva and Kerina rivers. The water catchment area is open to the east and due to the building of forest roads, which allowed easy access, during the last 50 years the century-old forests have been rejuvenated. The gorges dry up during the hot summer months.

Zelenkovska river – It originates from the northern slopes of Hadjiika ridge. A small section of the upper stream of the river falls within the territory of the Park, which traces its border. Part of its waters have been lead to Yasna polyana dam. It flows into the Black Sea through the Diavolski dol.

The overall assessment of the water supply coming from natural water sources on the territory of the Park is that it is not well endowed, especially in its eastern part, outside the karst region. The largest rivers originate from the karst springs and use them to maintain the summer flow. Many years of measurements have been performed by the HMS only for Veleka river. The maximum river flow of Veleka occurs in January, and the minimum – in September. 70% of the annual volume of water flows during the winter months – October, January, and February. The annual flow of Veleka river ranges from 323.5 mln. cubic meters during a year with average amount of rain, to 195 мln. cubic meters during a dry year.

Due to the uneven distribution of rainfall during the year, with high levels in the winter and very low levels in the summer, the density of the river network is relatively low. The latter, as well as the irregularity of the flow throughout the year, highlights the importance of the groundwater for practical purposes.

Around 94% of the water supply of Strandja region is guaranteed by the karst waters and water coming from cracks in the karst. They form a completely independent acquiferous horizon in the region of Malko Tarnovo. Around 120 karst springs have been found in the Park, but only 30 of them pump water at a rate over 1 l/sec. The largest one is Dokuzak, which has an average annual capacity of 257 l/sec./maximum flow capacity of 1038 l/sec. Well-know are also the springs The Grand Vris /10-40 l/sec./, Tsarnogorovo / 10 l/sec./, Katun /123 l/sec./, The Lake, Bakandzhiiski Vris, Mladejko, and others.

Note: On July 2, 2006, an unprecedented flood destroyed most of the coastal vegetation along Veleka and Rezovska rivers and their tributaries, and completely changed the way their valleys look. The self-regeneration of the rivers, as part of all the processes in our nature, will take tens of years to complete.