It is located 54 kilometers south of the city of Burgas and 42 kilometers from the town of Malko Tarnovo, 325 m a.s.l.

It is located at the foot of a high hill. There are two karst springs near the village – Bashbunar to the north and Babudzha to the south. The settlement on this place has existed since the time of the Bizian Thracian kings, and later of the Roman emperors. The open marble relief of the three nymphs from the II century AD, and a treasure of 499 folles (silver-plated copper coins) that were found here attest for its ancient origin, as well as the dolmens scattered in the vicinity of Bliznak. 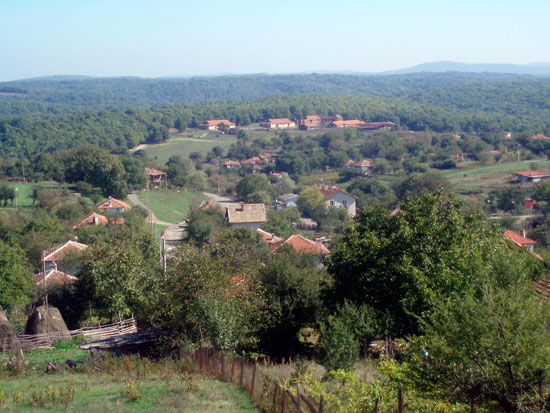 At the highest point of the village stand the remnants of the famous Karaevrenska Tower, a focal place for the events commonly referred to as “Karaevrenskata catastrophe” (1803). In 1803, the kurdjali hordes set the tower of the local Ottoman landlord (spahee) on fire and hundreds of people burned alive inside it.

Today, the residents of Bliznak village are descendants of refugees from Eastern Thrace, who settled here after 1913.

The vicinities of the village are home for well-preserved old oak forests of Quercus frainetto and Quercus cerris, and to the west visitors can feast their eyes on forests of Fagus orientalis and Quercus polycarpa. Single trees of Quercus hartwissiana rise along the rivers and gorges. The area is also natural habitat for two species of tortoises, as well as birds of prey.

The only active monastery in Strandja – Golyamo Bukovo Monastery – is located around 12 kilometers away from Bliznak village. The village is also a starting point for visits to the springs of Mladejka river and the archaeological sites near Evrenozovo village.

No accommodation options are available at Bliznak village yet.

The holiday of the village is celebrated with a fair on the day of the Nativity of the Theotokos (21.09).

It is located in the center of Bliznak village. The Church was built in 2004, to replace the old eponymous church erected soon after the settlement of the refugees from Eastern Thrace in 1913. It collapsed in the 1980s due to its unstable wooden construction. The icons from the old temple are currently located in the church of Varovnik village.

It is located 4 kilometers from Golyamo Bukovo village and 12 kilometers northwest of Bliznak village, amidst picturesque areas and close to small villages in Strandja. The surroundings of Golyamo Bukovo are region with a high concentration of dolmens, with numerous remnants of fortresses and mound necropolises.

The monastery was established in XII century. Its name is “St. Petka,” and the holiday of the temple is Holy Friday – the Friday after Easter, which is the patronal festival of the saint. There is a supposition that in the 14th century, it was one of the monasteries of Gregory of Sinai, part of the Parorian monastery complex.

The Bulgarian writer Anton Strashimirov also believed in this, because the “school of the Hesychasts” was located exactly here, and because “upon his last return from the Holy Mountain (Mount Athos), Gregory descended from a ship in Sozopol and headed towards his monastery.”

The monastery received its present form in the end of the 19th century. The Goliamo Bukovo monastery, an amazing cultural monument, is the only functioning monastery in Strandja. The holy spring “Life-Giving Spring” is located in the altar of the temple.