Situated on the flat back of a mountain slope and surrounded by deep valleys, the village offers a splendid view of the undulating round ridges of Strandja.

The oldest Bulgarian reserve, Silkosia, is situated to the east of Bulgari village, and 7 kilometers to the northeast is the Marina river protected area, which used to be part of Silkosia in the past. The surroundings of the village are taken by age-old forests with Rhododendron pontcum undergrowth.

It was first mentioned in a document from 1454, which proves that it is one of the oldest villages in Strandja, probably founded during the First Bulgarian Kingdom. According to professor Bozhidar Dimitrov, its residents are direct descendents of proto-Bulgarian soldiers who settled in these lands to protect our southern border. In the end of the 19th  century it remained the last Bulgarian fortress on seaside Strandja. The traditional conservatism of the local population contributed to the preservation of its Bulgarian character in a truly hostile Greek-speaking environment. 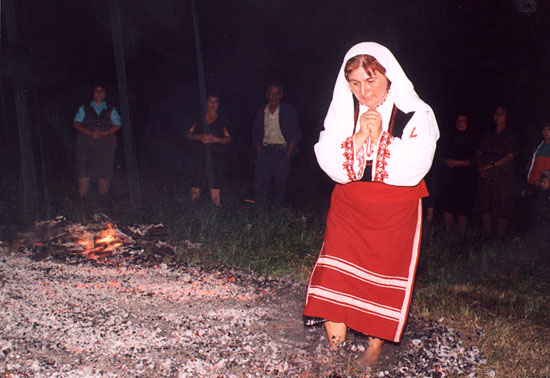 Nowadays, Bulgari is the only fire-dancing place in Bulgaria. It observes the ancient date of performing the whole ritual and the dance in the live coals – June 4, the Day of Ss. Constantine and Helena, old style. The pagan ritual, passed on from ancient times, is intertwined with Christianity through the legend of the two saints. The direct cultural continuity that is observed in Strandja is the reason for this ritual of Thracian times to preserve its main features to this day.

The “interception” of the fire-dancers and the dancing in a state of trance in the fiery live coals to the sounds of the fire-dancing drum are unique phenomenon in Europe. Only the initiated dance in the live coals, possessed by the spirit of St. Constantine and uttering prayers for health and forgiveness, and sometimes making prophecies for the future of the village, and of the world. Empowered by the power of God, the fire-dancers unlock sacred spaces, where they enter into a pure and true connection with God. 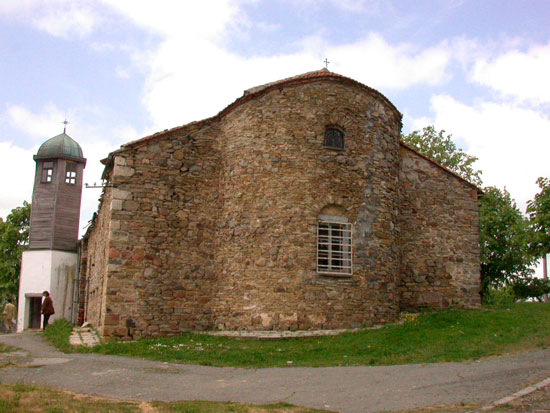 It is situated in the center of the village. The stone church was built in the second half of the nineteenth century. In 1903, during the Illinden-Preobrazhenie Uprising, the church was burned down together with the entire village. It was rebuilt in 1910. Cultural monument.

It is located in the center of Bulgari village, close to the village fountain. Konak is a Turkish word, which means house, a place where one stays for a longer period of time. The rectangular building is oriented relative to the geographic cardinal points and marks the sacral center of the territory of Bulgari village. The idea for the Konacheto is that it was a home of St. Constantine, where he stayed on his holiday. The sacred fire-dancing drum is kept here. On the day of Ss. Constantine and Helena, a sacrificial animal is slayed for the preparation of the traditional “fire-dancing boiled mutton.” The south side of the chapel plays a particular role. A window has been made there, and it is where the holy place is – the place where the icons are put on, in order to “rest.” The “interception” of the fire-dancers usually takes place in the konacheto, before they step into the live coals, followed by the “dressing up” of the fire-dancing icons and after that the fire-dancing procession heads for the wooden structure of St. Kostadin.

It is located in an old house in Strandja, owned by Mara Shonkova. The collection shows the typical housing arrangement in the late XIX c. and early XX c., the everyday life of the big rural families, the traditional costumes, authentic handmade fabrics, and many primitive tools used back then.