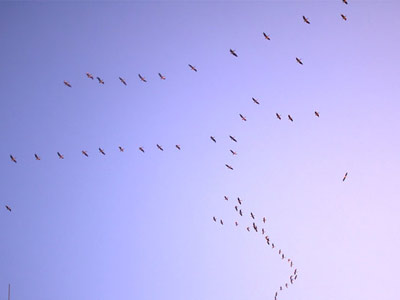 The second largest migratory route of the birds in Europe (Via Pontica) passes over Strandja – it brings together the flocks of Northern and Eastern Europe, and Western Siberia. The migration front narrows over the Nature Park to a few kilometers and in peak days visitors can see enormous flocks of white storks – up to 40 000 a day, as well as pelicans – 2 thousands, perns (Pernis apivorus) – about a thousand, buzzards (Buteo buteo) – 3 thousands, spotted eagles (Aquila pomarina, A clanga) – 2 thousands.

Globally endangered species like the imperial eagle (Aquila heliaca), the ferruginous duck (Aythya nyroca), dalmatian pelican (Pelecanus crispus), pallid harrier (Circus macrourus), and others, fly over the territory of the Park. The wetland of Malko Tarnovo is the largest standing water basin on the territory of the Park and visitors can see more than 200 species of birds around it.

The vast forests, meadows and riparian meadows provide raptors, songbirds, migratory dove and European roller species with an opportunity to rest and feed. The coastline of the Park is used by some rare migratory birds (red-breasted goose, European shag and Pygmy cormorant, black-crowned night heron, and others) for rest as well as for hibernation.